Arthouse distributors are wasting no time, two more superb movies from the Sydney Film Festival hit our screens this week. And there’s plenty more to come…

A lot of shocking things happen in writer-director Samuel Maoz’s anti-war drama, nominated as Israel’s contender for this year’s Best Foreign Language Film Oscar. By far the worst (for me) was when architect Michael Feldman (Lior Ashkenazi) forcefully kicked his dog. Sure, he had reason to be upset – he and his wife Dafna (Sarah Adler) had just been informed by unctuous military officials arriving at their apartment’s door that their son Jonathan (Yonatan Shiray), a corporal in the Israeli Army, has been killed on active service. But all the poor animal was doing was trying to comfort his master in that soulfully empathetic way known only to man’s best friend. Worse, the dog forgives him, in return for an ungenerous and barely perceptible pat on the head.

Far more tragic events unfold, one of the most unexpected coming at the end of the first of the film’s three distinctly different acts. Lots of reviewers have revealed that, but this exceptionally accomplished drama – in which every scene is impeccably crafted as a complex puzzle, is best enjoyed knowing as little as possible. That surprise turns the story on its head, and next we go to the isolated border checkpoint Jonathan is guarding with three other soldiers. This is the funniest sequence (yes, incredibly – this laceratingly bleak movie can be called a comedy) and contains sudden bursts of absurdist levity. Strolling camels outnumber vehicles, the boys’ (the soldiers are barely out of their teens) accomodation is a container cabin slowly sinking into the sand and their only danger appears to be boredom and the constant threat of one of them breaking into mambo. Nothing happens here, until, of course, something does.

Then its back to Michael and Dafna some time later… They may be estranged by now, certainly grief-stricken and guilty about something, though their mood is lightened by smoking a joint. “I remember thinking I was going to be happy,” a stoned Dafna says in one of the poignant lines in the movie. But then Michael demonstrates another dance – yes a foxtrot which endlessly circles back to its original starting point. This third act is the most confusing, and even feels, for a while as the dope kicks in, light-headed. But wait for it, Maoz is keeping his hardest and most brutal kick until the very last frame. It’s a devastating scene, one which produced audible gasps at the festival screening I attended, and then a stunned silence before the inevitable applause. We should have been prepared, for everything in Moaz’s very clever script, which is all about guilt, loss and the absurdity of war was leading in this direction. This is bravura filmmaking – easily my favourite movie from the Festival, and an outstanding contender for the year’s best. What a pity its now only getting such a limited general release. MA15+ from June 21. Local cinemas are Dendy Newtown, Opera Quays, Palace Verona and Cremorne. ★★★★★ Watch the trailer here.

Shane Jacobson has been a busy man this year, though his two other 2018 releases (The BBQ and That’s Not My Dog), both comedies have been critical and box-office flops. He’d be forgiven for wanting to try something completely different, and in teaming up (as executive producer) with real-life brother Clayton Jacobson (as director) for this dark and violent family dramady, he sure has. Both also star in a tight, claustrophobic tale of two brothers planning a murder. We first meet them in the chilly pre dawn, approaching their old family home somewhere in rural Victoria, carefully staying hidden. They’re there to kill their stepfather Rodger (Kim Gyngell), make it look like suicide and so regain their inheritance lost by their mother’s (Lynette Curran) remarriage. While they wait for him at the house, there’s trouble – old issues and filial tensions surface, there’s some pathetically poor planning on top of a few unexpected visitors, including their terminally ill mum, and later Sarah Snook. All of this is wittily drawn out, razor-sharp and blackly funny in a Fargo-esque way. It’s also very tense.

True to his nice-guy image, Shane plays the brother (Terry) less committed to deed. A killer with a conscience! Hey, this is the knockabout everyman from Kenny, the loveable grandad who saves penguins (Oddball) and the public face of IGA supermarkets – how could he also be a cold-blooded thug who kills his own relatives for financial gain? Though he did after all, come along for the ride, even if he was a bit too thick (he comes across as more dim-witted than a man with scruples) to fully understand the profoundly amoral absurdity of what he’s doing. It’s a slow-burn and edgy ride through to the final bloody fireworks, but anyone who may be thinking that good sense and justice will prevail in the end (C’on Kenny, surely not?) just hasn’t been paying attention to the sort of pitch black, cynical dramas which are now popping up all over the place on both streaming TV and in arthouse cinemas. And the dastardly Jacobson bros have made a very worthy addition to that genre. MA15+ from June 21. Local cinemas include Dendy Newtown, Reading Auburn and George St. ★★★★ Watch the trailer here.

Sure to be a hit locally, the high class lesbian soap Disobedience from A Fantastic Woman’s Sebastian Lelio is already on our screens, as is legendary Aussie horror writer-director Leigh Whannell’s new sci-fi Upgrade (yes, you’re right to distrust driverless cars). Both reviewed here.

The official competition prize-winner The Heiresses, another lesbian drama (this time from Paraguay) doesn’t have a release date yet. But it is on Palace Film’s list, so expect to see it soon. Palace scored a double win, their brilliantly caustic The Insult from Lebanon also won top spot in the Audience Awards. It’s due out on August 30.

Look out too for sexy potboiler The Second – the first Aussie feature film to be made by Stan. No lesbians – just two ladies, Rachel Blake and Susie Porter (below), who are very good friends… It’s getting a big screen release on July 5 and before turning up on the streaming service two weeks later.

No Date, No Signature, a searing Iranian drama sure to appeal to those who enjoyed A Separation is at Dendy Newton from July 12. Then on July 26 there’s Whitney (we’ll have a ticket giveaway for this latest look at the tragic singer’s life, so keep your eyeballs on this website); and in the same week the festival’s opener, The BreakerUppers once again proves those peculiar NZers, apart from being progressive and smart enough to elect Jacinda Ardern as PM, are very funny people indeed. August 2 brings us The Wife, followed closely on August 9 by a festival fave which sharply divided its audiences (all its screenings including the extra sessions were sold out) – Spike Lee’s Blackklansman. 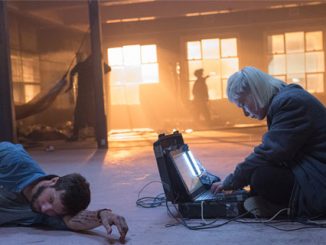