Football players being booed is nothing new…

Movie of the week: The Keeper

Back in the early 50s Manchester City’s ace goalie Bert Trautmann got the same aggressively hostile reception as Adam Goodes, only more so. And it has to be said – for good reason… For Bert was a former German paratrooper, decorated with the Iron Cross for his services to the Nazi regime that had recently bombed the industrial north of England, killing thousands of its citizens. That he’d be the victim of the home crowds’ war-sharpened xenophobia was pretty understandable. What is less clear is how the former PoW got to be wearing the esteemed club’s jersey at all, let alone went on to be its star player and eventually an English soccer legend.

The Keeper is the sort of ‘based on an incredible true story” movie that immediately prompts a deep dive down the Google wormhole. “Surely that can’t have happened!” is a fair enough response, and you’ll be at least half right. Though Bavarian-based director and co-writer Marcus H Rosenmüller wastes no time establishing Bert (David Kross) as a ”Good German”, someone whose prowess at prison camp football caught the eye of a local shopkeeper and regional coach Jack Friar (an amusing John Henshaw). He further establishes our sympathies by portraying a British camp commander (Harry Melling) as a vindictive brute, and significantly – giving next to no background at all on Bert’s past, his family or even his present beliefs. In reality as a youth he was an enthusiastic young Nazi, early volunteer and much decorated warrior for the cause, but all we’re told is that he “loves playing football” and is pretty damn good at it. His expertise extends to charming the suspicious northern townsfolk too – in particular Jack’s initially frosty but spirited daughter Margaret (Freya Mavor). Soon enough they’re in the horizontal position, and Margaret’s old beau is despatched out of play in a drunken “winner takes all” penalty shoot-out staged in heavy rain (this is England! There’s a lot of mud in Lancashire…) Inevitably a scout from Man City comes knocking.

Trautmann was indeed a fantastic player, and the booing did subside once Manchester’s sizeable Jewish community decided reconciliation was preferable to needlessly picking at old scabs. He proved himself in match after match, most heroically in the historic 1956 FA Cup final where he played on for the last quarter with a broken neck, and saved the day. As Kross plays him, he’s a likeable and humble, but incredibly determined “regular guy.” And the movie itself is just as winning and amiable – both an improbable love story and inspirational tale of redemption and overcoming prejudice. Less successful is a jarring subplot there to explain Bert’s hidden psychological demons which come into focus after a family tragedy – and inevitably, put a strain on his relationship with Margaret. Best not look too deeply into that. Rest assured they may not fit “the legend.” M from July 25. Inner west cinemas include Palace Norton St, Central and Dendy Newtown. ★★★1/2

The Lion King – Fair enough to give a much-loved classic a reboot, but surely this is a missed opportunity. Anyone but Disney would have taken modern sexual politics on board when updating their back catalogue, and retitled this one The Lion Queen. That would make sense, for in the wild, lions are matriarchial – with the dominant females making all the tactical and vital survival decisions for the pride. Sure, the males like Kimba are bigger and more aggressive, but as this New York Times article reveals – they generally don’t hang around after fathering a few cubs (men!) and the type of masculine tensions which made Kimba an outcast would simply not have happened. Nor do lions care much about other animals in the savannah – except as dinner. They wouldn’t waste time hanging round with a warthog with a flatulence problem, and certainly not one as annoying as Seth Rogen. The most disturbing thing in that article (well worth reading, actually) is its dismal conclusion. There are now less than 20,000 lions left in Africa, 50% less than when the first movie was made in 1994. But at least we still have playful animators and talented computer graphic artists with imagination and a huge corporation prepared to back them with limitless resources. Thanks, Disney! PG on now, everywhere. ★★★1/2

The White Crow – An enthralling movie could have made out of Rudolf Nureyev’s dramatic defection to the West in 1961, but this isn’t it. Much of Ralph Fiennes’s curiously lifeless biopic of the legendary Soviet dancer (Oleg Ivenko) is a jumbled plod though his early years  – born on a train to a peasant mother and his late start learning the ropes at a dance academy in St Petersburg. The school was run the ever-accommodating and generous Alexander Pushkin (Fiennes), whose randy wife (Chulpan Khamatova) was even more generous – teaching the cocky young Rudy a few extra dance moves. On tour in Paris, where the defection took place, aside from a few petty ballet company politics – everything seems pretty sedate. There’s a quite dull (and platonic) affair with a melancholic heiress (Blue is the Warmest Colour’s Adèle Exarchopoulos), and the section of the story that should be generating the most momentum and tension leading up to the climax simply drifts along interrupted by incessant flashbacks. Nureyev himself behaves like an arrogant brat throughout, irritated by the faintest of slights about his brilliance or humble background. His actual decision to defect seems to have been made on the spur of the moment. Whatever the Cold War warriors on both sides later made of that (a lot!) – his most famous move certainly wasn’t an ideological one. The West did offer him freedom and wealth, and a lot more. He died of AIDs related complications in 1993. M on now. Local cinemas include Palace Norton St, Central  and Dendy Newtown ★★1/2 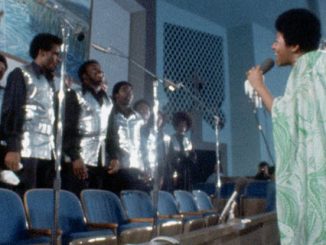