Is there no subject too icky for cinema to tackle? Many of the people in Stuart Blumberg’s (The Kids Are All Right) latest dramedy suffer from an embarrassing problem. Not to put too fine a point on it, they are compulsive masturbators.

As Adam, Mark Ruffalo leads the pedigreed cast of shameless actors, unafraid to share all. Tim Robbins, Josh Gad and Alecia Moore (aka Pink) also play members of an AA-like support group for recovering sex addicts. Gwyneth Paltrow turns up. She has issues too, but basically the pumped and nubile star is there to give Adam a hard time and test his resolve of “no-uncommitted sex”.

It’s a credit to Blumberg and co-writer Matt Winston that such cringe-inducing material is so shrewdly and deftly turned into an absorbing and even uplifting contemporary drama. Funny too, as Adam (“clean for five years”) has to have his motel’s cable TV removed before he dares close the door. Then fight (and loose) the urge to go down to a late night appliance store and buy a laptop. Ahhh… relief at last, but talk about a First World problem!

Thanks to Transmission Films we have 5 double in-season passes to give away.

The drug trade is now well entrenched in Australian country towns. Especially out west, where there’s plenty of room to hide and just as many customers among the dispossessed. Ivan Sen has been here before (Toomlah) and returns this time with a high-powered cast and a tense, moody thriller.

Aaron Pedersen stars as black detective Jay Swan, returning home after a long spell in the city. An Aboriginal girl, probably doing tricks, has been found dead by side of the road. Uncomfortably for Jay, who no longer fits into the bitter racially divided town, she’s a friend of his estranged daughter. Complicating matters, there’s more than a whiff of corruption amongst the local cops, with Hugo Weaving and Tony Barry playing sinister and enigmatic roles.

Then there’s Ryan Kwanten, out on the farm, clearly up to no good; it’s only a matter of time before things come to an explosive climax. That’s in a long shoot out worthy of the finest westerns, to which this taut, very accomplished Oz drama respectfully nods.

Mystery Road opened this year’s Sydney Film Festival to wide acclaim. What took it so long to get released?

Thanks to Dark Matter we have 10 double in-season passes to give away.

Metallica: Through the Never

There is some plot in what is basically a spectacular filmed concert, it involves a roadie (Dane Dehaan) sent on an mysterious mission for the band who witnesses street riots, a menacing horseman and mass hangings.

Meanwhile the band plays on, as does frontman James Hetfield spitting out lyrics about dystopia, destruction and death. Men in the audience (and they are all men) are bald and take their shirts off.

There are flames. Skulls! The men have tattoos. Lots of tattoos!

I left the movie feeling pumped. I handed in my 3D glasses, ear plugs… I wanted to take crystal meth. Kick a puppy. Pick a fight with a bikie.

No need for a thesaurus, anyone looking for explicit alternatives to ”human excrement” only need check Diana’s UK reviews. But, silly distributors – why did they premiere it there? We all know the reverence Brits hold for the Queen of Hearts is only matched by their utter contempt for all things Australian.

Surprisingly, most give Naomi Watts all the credit she is due for making the most of what is a pretty soggy affair.

Oliver Hirschbiegel’s blue-blood soap is not nearly as bad as they say, but anyway, who cares? The huge in-built audience for this is utterly, totally critic-proof.

It’s no secret that Margaret and David are “over it”, privately they may even admit it – it’s just that no one will let them quit!

Anyway, the clever folk at Dendy have come up with a lively contemporary alternative to the ABC show, every second Monday opinionated local Inner West bloggers and film fanatics Blake Howard (2UE) and Daily Telegraph writer Maria Lewis will be recording a live podcast after selected Cult Classics screenings in Newtown.

Watch out for Alien – Directors Cut on Monday 14th Oct at 6.30pm, Ghostbusters on the 28th followed by The Matrix on Nov 11th.

For more information see www.dendy.com.au and check out Blake and Maria’s site www.graffitiwithpunctuation.net 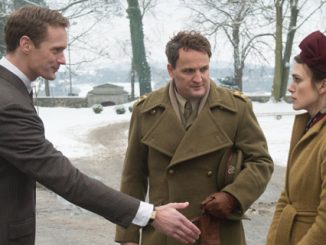