For the majority of us, our first food memories are shaped by our mothers. They are, after all the ones who have typically been charged with our nourishment from birth and have literally worn the fruits of their labour, firstly on their chests and later possibly in their hair and on their clothing, thanks to a high chair, a plastic spoon and some good aim.

We have a lot to thank them for across the board, so it’s rather perplexing that the great breastfeeding debate continues to dominate our social media feeds and water cooler conversations.

Recently, a dear friend and new mother posted a video about discrimination in public places when it comes to breastfeeding. It contained footage of complete strangers yelling at mothers in parks and restaurants discreetly doing what comes naturally… feeding their baby. Though I personally haven’t yet made a decision on the subject of procreation, I found it shocking that something as real and natural as feeding one’s child should be couched in such feelings of embarrassment and shame.

While it is true that legislation around the world has progressed to support the fact that breastfeeding in public is not a crime of nourishment, we still face a huge social stigma surrounding women who choose to do so.

Three years ago, in our very own progressive Inner West, a Newtown café was cited for asking a new mother not to breastfeed on her premises. The comment sparked public outrage, and perhaps some deserved embarrassment for the proprietor, however the fact that we’re still having this discussion several years later and that women are still forced to feed their children in toilet cubicles lest they feel the wrath of the public, is beyond me.

As the marketing machine gears up for Mother’s Day, and we plan our socially acceptable gatherings, perhaps we should think about celebrating and supporting mothers (not just our own), by supporting their right to feed their children without shame.

Just because mothers CAN put up with some pretty challenging experiences in order to raise us, doesn’t mean that they always SHOULD. 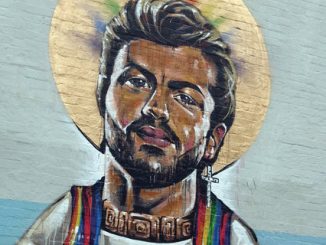