Vegan author Terry Hope Romero is one of many international guests coming to Marrickville for the first ever Sydney Vegan Festival on March 29th.

How will you be involved in the Vegan Festival?
I’ll be right there on stage presenting; doing my favorite combo of cooking demonstration, Q&A chat and general ramblings about all things vegan cooking. I have a fun little new book coming out in June, Salad Samurai, and I’ll be featuring a recipe from that!

When did you first start following a vegan way of life?
Very long story framed very short, I started out vegetarian at 16 and then sometime around when I moved to New York City in the mid-90s gradually went vegan. In the decades since vegan food has improved dramatically, along with the general acceptance of vegan lifetstyles. As you can imagine most people have their own stories and reasons for choosing vegan, mine revolve around three basic points: it can be better for you health, it’s probably better for the environment, and it’s definitely better for animals.

What four ingredients are most essential to a vegan kitchen?
Olive oil, beans (canned and dried), fresh veggies and high quality spices. Sorry, that’s not exactly four ingredients is it? If there’s a fifth it may be nutritional yeast, the vegan staple with an awful-sounding name that provides a boost of umami to ‘cheese’ like dishes.

As the author of several cookbooks, how do you continue to come up with fresh, interesting recipes?
I live in NYC and am surrounded by all kinds of cuisine, from trendy to traditional. That, and living in Queens, one of the most ethnically diverse places in North America, I have access to lots of interesting markets and neighborhoods.

If you could invite anyone over for dinner, whom would you invite? Why?
Margaret Atwood. We’d talk about fleather and our weird dystopian sci-fi vegan future.

1. Cover cast iron Dutch oven with a lid and preheat over a medium-high flame for at least 15 minutes. If you have a heat diffuser plate, place that underneath the pot.

2. Sift together both flours, baking soda and salt in a large mixing bowl. In a large measuring cup whisk together soy milk and apple cider and set aside to curdle for 2 minutes.

3. Form a well in the flour, add the curdled soy milk, currants and caraway seeds. Stir just enough to moisten ingredients. The dough will be slightly sticky, that’s fine…don’t be tempted to add extra flour.

4. Generously flour a work surface and drop the dough into the flour. Gently pat the dough into a circle, then carefully flip over a few times to coat generously with flour. Pat the sides with a little additional flour.

5. Use a shape knife to slice a deep X into the top the dough at least 5 inches long (cut deep, about 2 inches deep). Uncover the Dutch oven, lower the dough into the pot and cover. Bake for 20 to 25 minutes until the bread is about doubled in size and feels firm to the touch. Uncover the pot. Use a long handled spatula (and wearing oven mitts to protect your hands!), carefully flip over the bread and bake uncovered another 5 to 10 minutes to lightly toast the top of the loaf.

6. Remove the bread and allow to cool for 5 minutes before slicing. Serve warm. Wrap leftovers tightly and reheat before serving. 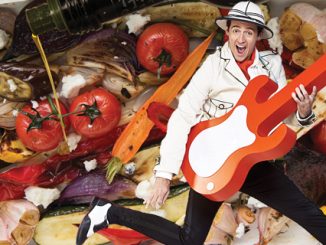 At home with… Stefano & Edoardo